Ever since I eliminated processed sugar and grains from my diet, I have always chosen brown rice over white rice. For the same reasons that anyone else might choose brown rice over white rice, I have always assumed that brown rice was healthier because it contains valuable vitamins and minerals (found in the bran and germ of rice granules), which white rice does not. However, if you read my last post, you'll know that I recently faced some nutritional confusion when I was told that brown rice was not as healthy as I had initially thought.

Who told me? One of my fitness instructors and the writer of Sisyphus No More, A. If you haven't already checked out A's blog, I highly recommend it. He has some really good tips and advice about diet and fitness. But, not only that. I really appreciate A's approach to diet and fitness, because he emphasizes the importance of finding what works for you as an individual, a mantra to which I also adhere.

But, never mind that. What about this brown rice versus white rice dilemma? When it came to exposing the truths about these starchy grains, I couldn't not ask A to share his knowledge and opinion (after all, he was the one who brought it up in the first place). 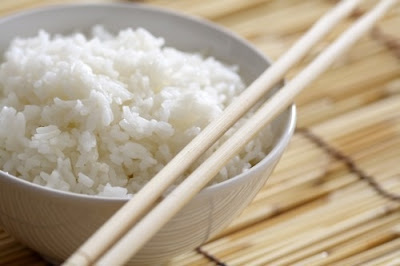 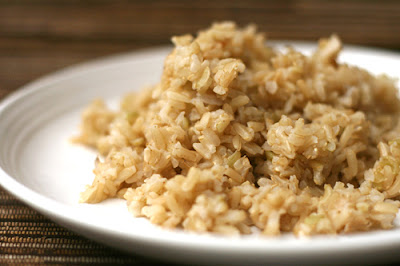 So, here it is. My very first guest post, A from Sisyphus No More:

Before I write an article, regardless of how much I think I already know, I research the topic for a few days.
There is so much (too much) information out there – from studies, to experts, to doctors, etc. - that finding
the “right” information is often not as simple as one might think.

As with many health topics, the deeper you dig, the more you find. And more often than not, there is no Brown or White answer. There is only opinion.

**Before I continue, it should be stated that I am a Paleo diet advocate. Meaning, I avoid all grains. It should also be stated, however, that after a ridiculously hard workout, I will eat White Rice.**

RICE
As most of you know, White Rice is simply milled and polished Brown Rice (i.e. The Rice Bran, Germ, and
Aleurone Layer have all been removed), whereas Brown Rice contains both the milled seed (White Rice) and all the other supposedly “good” stuff.

BROWN RICE - CONS
• Brown Rice contains anti-nutrients called Phytates. Phytates bind to vitamins and minerals and render
them “un-absorbable.” And as such, many of the above mentioned minerals in Brown Rice don't actually get
absorbed by your body.

• Brown Rice also contains Lectins. Lectins can cause autoimmune issues, block nutrient absorption, and
damage the intestinal lining (Leaky Gut). This is not that serious an issue as cooking will neutralize most of the
toxicity of Lectins. But it does beg the question, “Why should I have to neutralize the toxicity in my food before eating it?”

• Brown Rice is a starch (I won't get into this too much, but suffice it to say, a high starch diet is not ideal).

WHITE RICE – PROS
• None. It has very few nutrients or health benefits.

MY REAL WORLD APPROACH
Our bodies can recognize, understand, and process the starch in White Rice just as it would the starch in Vegetables (White Rice, however, contains considerably more starch than leafy greens).

In my everyday life, eating White Rice after a HARD workout, when my glycogen stores have been depleted and when I'm highly insulin sensitive, is a good thing. I can replenish glycogen, enjoy rice (which I absolutely love), and assuming I don't eat too much, still stay relatively Low Carb / Paleo.

The reasons I don't eat Brown Rice:
• Because of the Phytates, I'm not getting many of the minerals in it. I'd rather just eat White Rice and a plate of choice Vegetables.
• I'm not a fan of de-toxifying a potential “poison” in order to make it harmless and edible.
• I'm still getting the same amount of starch as I would with White Rice.

WRAP UP
I don't look at Rice as a health food. Brown or White. I don't eat it for it's minerals, fibre, or health benefits.

For me, Rice is just starch, and I consume it as such - strategically throughout my week.

One last thing: it used to be (and probably still is) common belief that Phytates would bind to other minerals from other foods, making your entire meal less nutritious. But research has shown that Phytates - in Brown Rice, for example - only bind to the minerals found within the Brown Rice, and nothing else.

So, how disappointed are you now that these "truths" about brown rice have been exposed? Stay up to date with nutrition advice and information by doing your own research and finding what works for you!


DISCLAIMER: I am not a nutritionist, physician, or any kind of health professional. Everything that you find on my blog is based on my own knowledge and opinion. If you require specific health and fitness advice, please seek a qualified health professional.
Posted by G at 06:17