One thing about the Whole30 that really stands out for me is its emphasis on avoiding processed foods, even for the simplest things like coconut or almond milk. For example, full-fat coconut milk is recommended over the light versions, because the lighter coconut milk tends to have additives. Likewise, store-bought almond milk isn't advised during the Whole30, because it also (usually) contains additives. In this way, participants of the Whole30 are not only eliminating certain foods from their diet, but also additives and preservatives (so long as they do avoid these processed foods). And, so long as they're consuming grass-fed meat and organic produce, they will also be avoiding the consumption of some hormones, antibiotics, and pesticides. The Whole30 therefore considers all aspects of what we are ingesting, not just the food or nutrients themselves.

Another point about the wholeness of foods consumed during the Whole30 pertains to the ways in which we might actually prepare these foods. The Whole30 is highly against "paleo-fying" recipes. For instance, just because coconut flour on its own is Whole30-approved, the program itself does not advise using coconut flour to make say, pancakes or pizza dough. This would be considered "paleo-fying" a recipe. That said, coconut flour is Whole30-approved for use as a thickener in sauces and stews.

Okay, so even if I use coconut flour, coconut sugar, and coconut oil, I can't make doughnuts while I complete the Whole30. But, what counts as "paleo-fying" a recipe? What about pulverizing nuts to make a fine crumb to coat fish fillets? Well, I did it. I figured that it's not so much paleo-fying breaded fish as it is just making a nut encrusted fish (this is when you nod your head in agreement).

This recipe is for Pecan Encrusted Basa, what I would argue is better than any breaded fillet I've ever had and not "paleo-fying" a recipe, but making something totally its own (and incredibly delicious, I might add). The buttery flavour of the pecans compliments this already delicious white fish beautifully. And, while I kept the recipe simple with pecans, salt and pepper, you could easily add some spices to your flour for an entirely different dish. 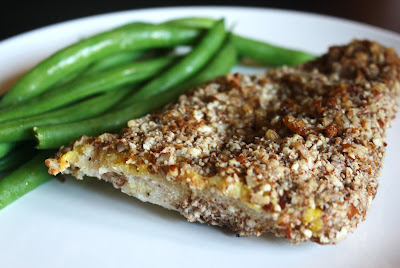 2. In a food processor, blend pecans until a medium-fine crumb. Transfer ground pecans to a dish large enough to accommodate your fish fillets.

3. In another dish, combine the coconut flour and salt and pepper. In a third dish, whisk the eggs.

4. Coat each filet in coconut flour, then egg, and then pecans. Place on prepared pan.

5. Bake for about 35 minutes or until fish is cooked through and crust is slightly crispy.

Try This: Use a different nut! Try walnuts or macadamias. Feeling even more adventurous? Add a spice or combination of spices to your nut mixture. I'm thinking pecan and cinnamon - yum!


DISCLAIMER: I am not a nutritionist, physician, or any kind of health professional. Everything that you find on my blog is based on my own knowledge and opinion. If you require specific health and fitness advice, please seek a qualified health professional.
Posted by G at 07:09